“If aliens are watching this through telescopes, they’re gonna think the dogs are the leaders. If you see two life forms, one of them’s making a poop, the other one’s carrying it for him, who would you assume was in charge?” –Jerry Seinfeld

Disclaimer: I recently saw a play, “No More Dead Dogs” in which high schoolers protest reading books about dogs because they always die in the end.  This post is NOT like that.

For as long as I can remember, I always wanted a dog. I brought my stuffed dog, Fluffy, pretty much everywhere, until he was covered in paint and far less furry than when he’d received his fitting name.

From the time I could read, I was checking out books about breeds, and training, and talking dogs from the library, often bragging to the librarian that I would receive a fluffy red Cock-a-Poo for my next birthday. I got a hot pink Furby instead.

My dad had been raised with poodles, my mom, on the other hand, was not a dog lover, and determined that cleaning up after two kids was enough. Given my inability to do laundry, I guess I have to concur.
In third grade, my best friend got her ears pierced after proving to her parents that she could keep her room clean for six weeks, the amount of time she’d need to dedicate to cleaning her piercings. I tried this same tactic, but to no avail.
By now, I had Woof at my side and decided that fake dog walks down the street, using a jump rope as a leash and a ribbon as a collar would prove my responsibility, my determination to have a jumpy, barking, pettable creature greet me at the door when I returned home from school and to sit on my lap when I watched TV.


Better than the Furby, my parents decided to reward my efforts with two hamsters, Fluffy and Lucky. I screamed in horror whenever they came near me. Their cage smelled awful. Their toys went unused. Lucky bit Fluffy’s ear off and eventually bit my finger as well. Fluffy died of a stomach tumor, Lucky was released into the ravine behind our house shortly after.
It may sound cruel, but I wanted a canine, not a rodent.

At this point, I was prepared to enlist my younger brother in the quest for a dog, and he readily started finding adoptable puppies on the Internet and facts on Retrievers and Labradors and mixed breeds.
Sadly enough, my dreams had not been realized by my birthday and my dear friend decided to get me a “grow-a-frog” as a gift.  The Number One rule of gift giving is never give anything living.  If it’s not, it should be.  The adorable tadpole in the kit soon grew into a cute frog that needed tedious water changes to prevent foul odors from overwhelming my bedroom. This was not exactly what I imagined as a dream pet.

One evening during a particularly tragic water-changing event, my dad accidently put hot water instead of cold into the tank, boiling my pet into soup and causing a flow of tears that could have filled the tank with the cold water necessary for frog survival.  My dad felt terrible and promised that the next afternoon after synagogue we could discuss getting a puppy. 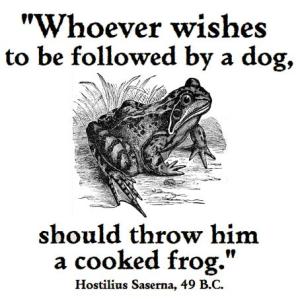 Much to my luck, the second frog I had sent away for arrived in the mail that afternoon and all hopes of having a dog were lost.  This frog reeked worse than the first, croaked louder when I was sleeping, and was an all around creepier amphibian to have in my daily life.  After years of desperately asking friends to babysit the poor creature, he was finally released into the wild, in a nice river in a nature preserve where he still lives happily to this day.
Now, it may sound like I’m a bit of a pet killer, but my Furby is still safely blinking and crowing from my closet! 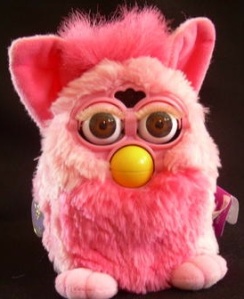 By the end of middle school, I had mostly given up on my dog owning dreams.  I changed the theme of my Bat Mitzvah from Dogs to Monkeys, started collecting makeup over dog accessories, and spent my time reading Seventeen instead of Dog Fancy magazine.
And yet, my brother was still not ready to let go of the dream.  He continued researching and begging and pleading, until finally one day after family brunch downtown, he convinced my parents to visit a local puppy store, where we immediately fell in love with a golden miniature poodle.
I use “we” gently.  I didn’t particular like this puppy, he kept biting my fabulously stylish gaucho pants and I had been disappointed by puppy shopping far too many times that I just wanted to leave and hang out with my friends.
The week before I started high school, my parents purchased our first puppy and suddenly I realized that my last fourteen years of work had been absolutely worth it.

After a few days of heavily debating names (my brother wanted Rex, because it sounded tough; my dad wanted Mincha because it was the name of the prayer service that occurred at the time of the puppy’s adoption; my mom was too busy on the phone shocking everyone with the news of our new family member to really care too much), we chose my suggestion, Cory, after everyone’s favorite curly-haired sweetheart from Boy Meets World.

Cory was difficult, at best. He howled when we went to bed and left him downstairs in his crate, which we learned to call his “home,” to be more positive. Cory peed on my friends’ laps and on schoolbooks I left on the floor. He wouldn’t stop humping. He shredded many jeans, chewed apart computer chargers, ran barking loudly down the street with no chance of being caught without the reward of a juicy hot dog, which we kept stocked in the freezer. 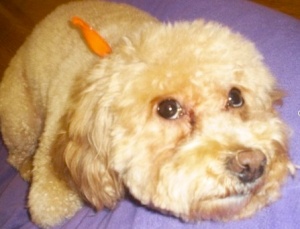 But, of course, Cory was too unbelievably cute to hold any grudges against, and only seconds after he stained the carpet we’d be tickling his tummy and cooing over him once again.
I grew to love my dog faster than I ever imagined.  He was there to cuddle with whenever I wanted, I could bake special treats for him and know that he’d enjoy them as if Julia Child had prepared them himself, he’d go on walks with me so I wouldn’t have to be alone.  Cory would listen to my secrets without judgment, agree with my opinions on tough social situations, be the loving third-party in any family feud that would arise. He has a great “Doganality” as we put it, always smiling and looking precious and perfect in any situation. 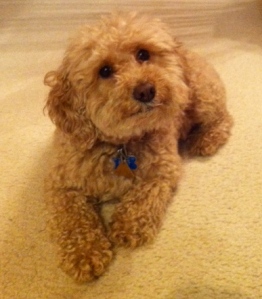 Before Cory, I had no idea that dogs yawned or sneezed or were so cozy to snuggle with. I didn’t know how happy I would feel upon hearing my dog barking with excitement right before I entered the house.  I never considered what dogs were thinking about or if they even thought at all or if when Cory twitched in his sleep he was indicating a bad dream or merely an itch.  I was stunned to learn that dogs can have a vocabulary of upwards of 40 words, depending on how smart they are.
Cory is the Albert Einstein of dogs.  And I’m not just saying this because they’re both Jewish. 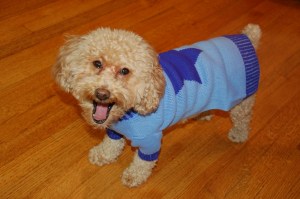 Cory is brilliant.  He’s bilingual.  He closes drawers when we leave them open.  He helps drive and honks the horn in busy traffic. He changes TV channels when I’m watching bad reality shows. Never  has he attempted to drink out of the toilet.